Last December, we profiled a brave group of educators from the New America School charter system. They’re seeking to become the first charter school educators to unionize in the state of Colorado. Since then, bus assistants from Cherry Creek and Deaf/Hard of Hearing Interpreters from Littleton have joined in calling for their districts to recognize them as a union and immediately begin bargaining with them.

Cherry Creek Bus Assistants are vital in making sure our students arrive at school and return home safely every day. They are responsible for making sure the most at-risk students arrive at and depart school safely. Currently, bus assistants in the Cherry Creek School District start at a little over $14 per hour, which is nearly $2 less than the minimum wage in Denver, and $1.50 less per hour than their counterparts in Aurora and Littleton. For context, the King Soopers workers who won their strike against the grocery chain this past year negotiated a starting wage of $16 per hour in 2022.

In addition to the low pay, experienced assistants have not seen their pay increase even as the starting wage has increased. The most senior Bus Assistant with over 20 years of experience in the Cherry Creek School District makes less than $20/hr.

Bus Assistants are demanding that the Cherry Creek School District show respect by voluntarily recognizing them as a union, giving them a seat at the table. They demand that the district work with their union on pay, benefits and working conditions. They demand that their pay be competitive with other metro area school districts and that they be reclassified as Bus Assistants rather than as paraprofessionals as they are now.

In March, Deaf/Hard of Hearing Interpreters (all seven of them!) unanimously agreed to form a union and ask the Littleton School Board for recognition. The Interpreters are vital in making sure that all students are able to learn in a safe and welcoming environment, and are able to learn the skills they need to advocate for themselves in life. Yet, they are treated as disposable by the district, with little input in how they do their jobs and support their students, extremely high turnover rates, and little pay.

“All educators and public employees should have the fundamental right to form a union in the state of Colorado,” said Amie Baca-Oehlert, high school counselor and CEA president. “We’re at a tipping point in time where educators are ready to leave the profession and not having a say in their workplace is a big reason. The 39,000 members of the CEA stand in solidarity with the educators in NAS, bus assistants in Cherry Creek and the interpreters in Littleton and we pledge to support in any way we can to help them achieve recognition.”

All three groups have an incredibly uphill battle to fight to win recognition as unions. The New America School board has already rejected the NAS teachers’ bid to become a union and they are moving into the next phase of their organizing plan. Both the Cherry Creek and Littleton school districts are dragging their feet in hopes that the Bus Assistants and Sign Language Interpreters lose their will to continue.

Furthermore, in this year’s legislative session, a watered-down collective bargaining bill for Colorado county workers made its way through the Colorado state legislature but it does not include K-12 entities and actually strips some protections away from county employees such as the right to strike.

The time to stand with our colleagues and fight is now. Please watch your social media and CEA communications for opportunities to take action to support these brave educators. 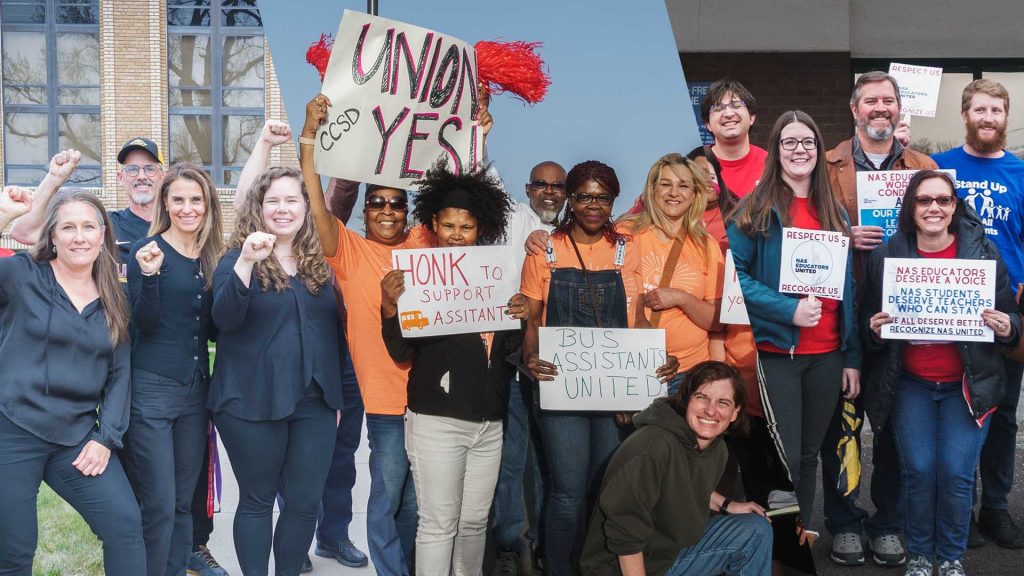 We Have the People Power

Amie Baca-Oehlert June 20, 2022 Blog, Member Organizing
In a world where obstacles are continually put in front of us, we must rise to the challenge of advocating for the public schools our students, their families and our fellow educators deserve. When we advocate together, we know that we will be successful. The power of our union is the power of us.
Read More

CEA Communications April 15, 2022 Press, Accountability System, Member Organizing, State Board of Education
Today, educators, students and families are breathing a little easier after the State Board of Education voted to grant Adams 14 time to produce its innovation and partial management plans for the district, Central Elementary and Adams City High School.
Read More