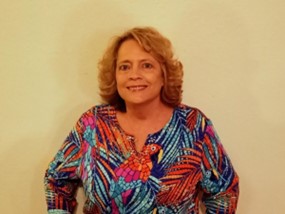 This June, we congratulate one of Pueblo County School District 70’s most treasured teachers, Eileen Lovell, as she retires after 32 years.

She began her teaching career in the district right out of college and for the past five years, she has been teaching the district’s Home Hospital Students who are those students who are too medically fragile to attend regular school. She travels to their homes and teaches them in their home environment so that they can still receive a quality public education without putting themselves at risk.

“I have been blessed to be able to teach these students for the past five years,” said Lovell. “Less than 2 years ago I was diagnosed with breast cancer and thought I would have to quit my job but my students and their families became my biggest cheerleaders throughout my fight. They were my inspiration to beat this horrific disease and I learned what courage was from them.”

Eileen was an “Army Brat”, born in Germany and growing up in Hawai’i before her family finally put down roots in Pueblo West, Colorado. She wasn’t sure what she was going to major in college but she had taught swim lessons for several years and she also had amazing, patient teachers growing up who were great role models, so teaching seemed the natural choice. She knew during student teaching that she had picked a great career.

She was a member of her union on day one of her teaching career. She knew that the teachers before her fought hard for their contract. After eight years of membership, she became a building association representative. She then served for three years as the president of the Pueblo County Teachers Association, where she helped combine the classified and certified union after the district did not want to recognize the classified union. The two unions became one: the Pueblo County Education Association. She has also been on the union bargaining team for the past 12 years.

After 32 years, she will miss her students but will enjoy “riding into the sunset”, which will include travel, outdoor activities and reading on a beach somewhere in Hawai’i.

CEA Communications December 10, 2021 Blog, K-12 Teachers, Member Stories
Sydney believes the union brings strength in numbers and allows us to better advocate for our rights as educators and fight for the schools that our students deserve.
Read More

CEA Communications October 20, 2021 Blog, K-12 Teachers, Member Stories
Born and raised where the chile is the best, Katie Brown grew up in Pueblo where it made her the person she is.
Read More

CEA Communications October 20, 2021 Blog, COVID-19, K-12 Teachers, Member Stories
One reviewer wrote, “Take a trip down the 2020-2021 lane with a character that is capable, passionate, and a fierce defender of her friends and community.”
Read More